Fantastic bird watching opportunity in the cloud forest and along the coast line of Ecuador's north. 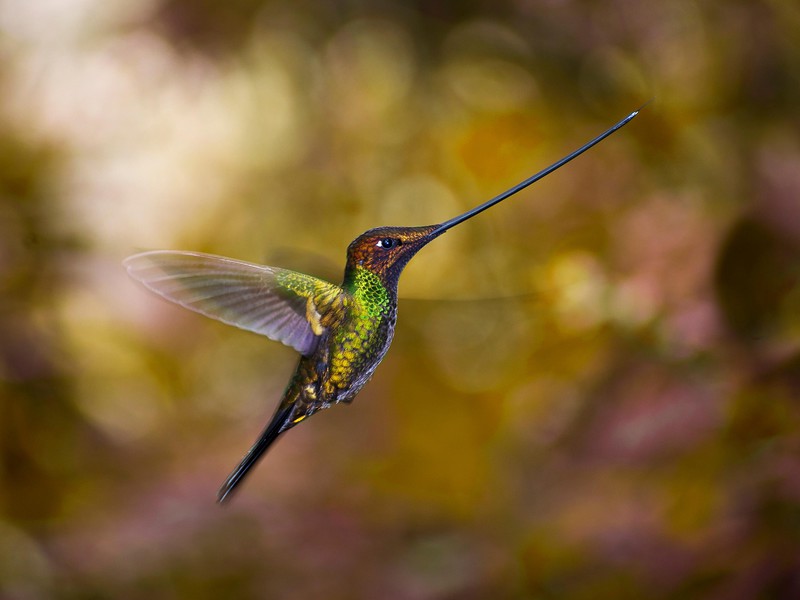 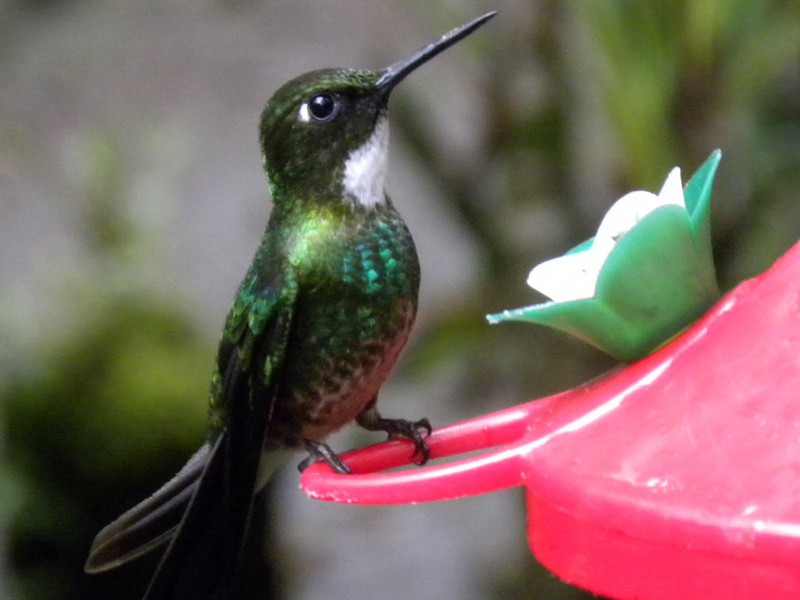 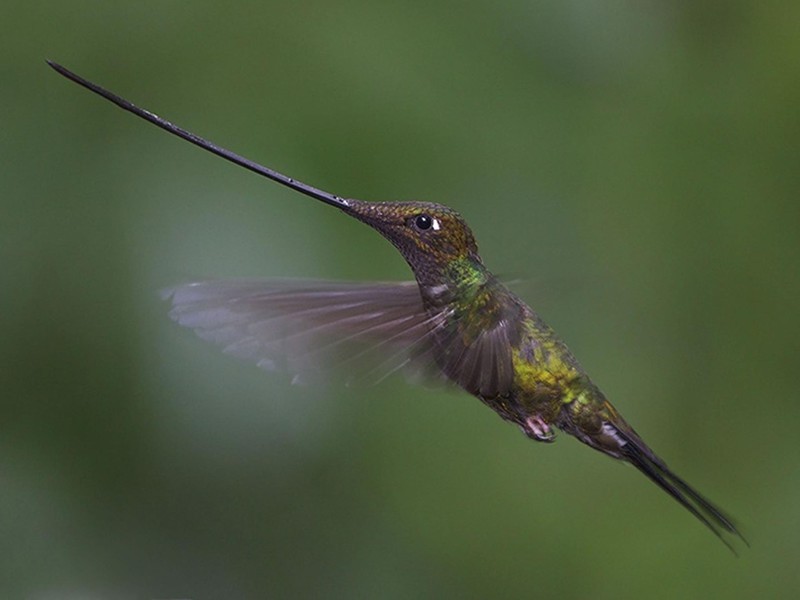 Nn the elfin forest in the slopes of Pichincha Volcano, the main trail is easy and the birds are amazing. Some of the birds you can regularly see include: scarlet-bellied and black-chested mountain-tanagers, great sapphirewing, sapphire-vented and golden-breasted pufflegs, buff-winged starfrontlet, sword-billed hummingbird. Black-breasted puffleg can also be seen here occasionally. On the old Nono-Mindo you may see the white-capped dipper, slaty-backed chat-tyrants, and the beautiful jay.

We’ll visit a new and exciting site in the western foothills, where rare species such as Choco vireo, indigo flowerpiercer, Esmeraldas antbird, and both Rufous-brown and black solitaires have been discovered in recent times. It also provides the best shot at seeing the endemic and gorgeous orange-breasted fruiteater, that is surprisingly numerous here, along with glistening-green and moss-backed tanagers, and Pacific (Buffy) tuftedcheek.

We’ll try to arrive at the lodge before dark to get views of the incredible hummingbird feeders, which can attract as many as twenty species in an hour, including violet-tailed sylph, brown Inca, purple-bibbed whitetip, western emerald, and purple-throated woodstar.

This now-famous antpitta reserve near Mindo will be a highlight of the tour. Here, a local farmer started hand-feeding giant, moustached, and yellow-breasted antpittas with amazing success. Here there is also a chance to see other Chocó specialties, including velvet-purple coronet, empress brilliant, and orange-breasted fruiteater. In the afternoon you can walk on the road to the upper Tandayapa valley to look for: Tanager finch, toucan barbet, plate-billed mountain-toucan.

This Mindo Cloudforest Foundation (MCF) reserve is one of the best birding sites in Ecuador. Over a dozen Chocó endemics have been recorded at Milpe, though the highlight for many visitors is the lek of Club-winged Manakins, using their wings to make buzzing sounds to impress females. Other targets here include Choco Trogon, Ochre-breasted and Rufous-throated Tanagers.

Afterwards, continue on to Canandé reserve. Most of the drive is through degraded habitat and plantations but there are some opportunities for birding stops to make the long drive a bit more interesting. Some birds you might see on the way include: Short-tailed Hawk, Ecuadorian Ground-dove, Snowy-throated Kingbird, Swallow Tanager, Pacific Hornero. We arrived at the lodge at mid afternoon. In the afternoon you can walk around the Tawny Faced Quail Trail where you can find: Red-capped Manakin, Rufous Piha, Scarlet-thighed Dacnis, Slate-throated Gnatcatcher, Chocó Poorwill.

Some of Ecuador's of best birding at Rio Canandé is found on the hike up to the mirador. Various birds of prey are seen more easily from the mirador. Recent observations of the 2 extremely rare Banded Ground-cuckoo are all coming from the ridge. Sightings of this enigmatic species are getting more regular at Rio Canandé and the local guides have estimated at least three established territories can be found along the main trail to the mirador. The best chance for the rare and local Golden-chested Tanager is on top of the ridge. Some of the birds you can see are: Chestnut-backed Antbirds, Broad-billed Sapayoa, Band-tailed Barbthroat, White-whiskered Puffbird, Blue-crowned Manakin, Ornate Hawk-eagle, Gray-backed Hawk, Black-tipped Cotinga, as well as Great Jacamars!

Perched birds and canopy flocks can be easier to see from the road than from inside the forest. Black Hawk-eagle, Zone-tailed Hawk, Long-tailed Tyrants, Lanceolated Monklet, King Vulture, Barred Puffbird, Scarlet-breasted Dacnis can be regularly seen along the Botrose Road. With some luck, you may also see Pacific Flatbill, Greenish Elaenia, Black-striped Woodcreeper, Blue-whiskered Tanager, White-bearded Manakin, Slaty Spinetail, and Laughing Falcons.

After a few hours more of birding at the Rio Canandé reserve, head back to Tundaloma lodge for the night. There should be time in the afternoon for some birding around the lodge, where we might see the rare Brown Wood-Rail, Blue Cotinga, White-necked Puffbird or Red-legged Honeycreeper.

Begin the morning by birding in the secondary forest patches, which can be quite good for spotting Five-colored Barbet, Black-tipped and Blue Cotingas, Black-breasted Puffbird, and sometimes even the super rare Yellow-eared Toucanet. Later, drive to the village of Selva Alegre, and take a motorised canoe for about 2 hours to Playa de Oro Lodge. The lodge is somewhat basic, but it’s location near pristine Chocó lowland rainforest makes staying here for three nights well worthwhile.

Playa de Oro is a remote village along the Rio Santiago in the province of Esmeraldas. Sadly, it is also one of the last parts of truly pristine Chocó rainforest left in Ecuador.

The area has many superb trails, but many of them are moderately strenuous so it is important to bring solid, supportive footwear. You can bird mainly around the lodge picking the easy and flattish trails.

Most of the best birding here is along narrow forest trails. While it can be challenging, the rewards are some of rarest of the Chocó endemics. Shy game birds like Baudó Guan, Tawny-faced Quail, and Berlepsch’s Tinamou are seen more easily here than anywhere else. Streak-chested Antpitta is quite common, and even the rare and beautiful Rufous-crowned Antpitta is seen here occasionally. This is arguably the best place in Ecuador to see the enigmatic Sapayoa, which recent research has shown to be a monotypic family very closely related to the Old World broadbills. You’ll sort through all mixed-species flocks looking for Slate-throated Gnatcatcher, Scarlet-and-white, Orange-fronted Barbet, and more.

Various trails lead their way trough this area, and can be reached by foot or canoe. These are some of the birds you might discover: Golden-chested Tanager, Lanceolated Monklet, Black-headed Antthrush, Great Jacamar, Lita Woodpecker, Scarlet-browed Tanager, Lemon-spectacled Tanager, Slate-throated Gnatcatcher, Ochre-breasted Tanager,Ocellated Antbird, Rufous-crowned Antpitta, and Choco Poorwill.

You’ll spend the first hours of the morning birding around Playa de Oro. Along the road to Lita you can check off any birds you still need on your lis, before heading up the hill to a new site: the road to Chical. This recently discovered birding road provides a good chance to see some very rare species, such as the gorgeous Fulvous-dotted Treerunner (which can be delightfully common here), Purplish-mantled Tanager, Hoary Puffleg, and Black Solitaire. We’ll spend one night in the Hacienda Primavera, a beautiful new hotel about 30 minutes from the main birding area.

In the morning you will have one last opportunity to spot some of the rare species before starting the road back to Quito. While it is a fairly long drive back, there is plenty to see along the way. In the dryer valleys you’ll look for Blue-headed Sapphire in the scrub. Enjoy a short stop at Laguna San Pablo to look for Ecuadorian Rail and Subtropical Doradito before finally arriving in Quito.

Your tour ends today. Continue on with your planned Ecuador trip, or transfer to the airport in time for your return flight home.