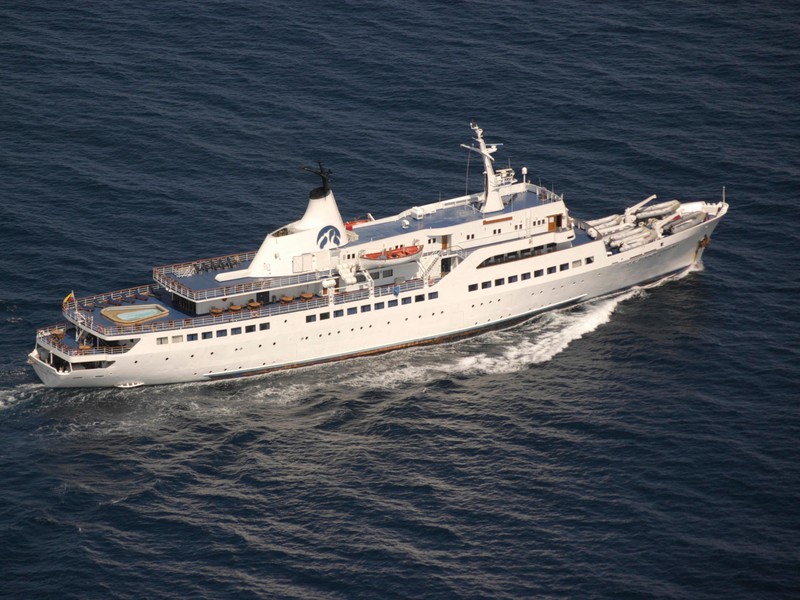 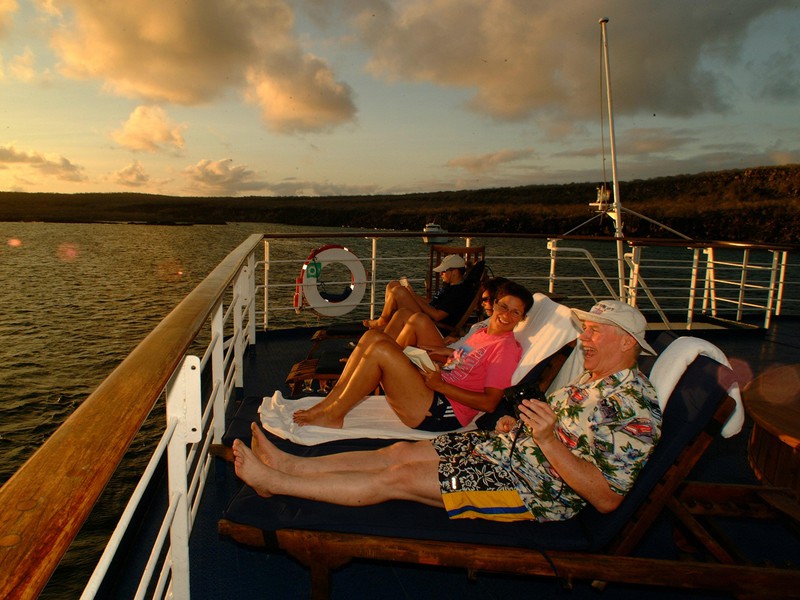 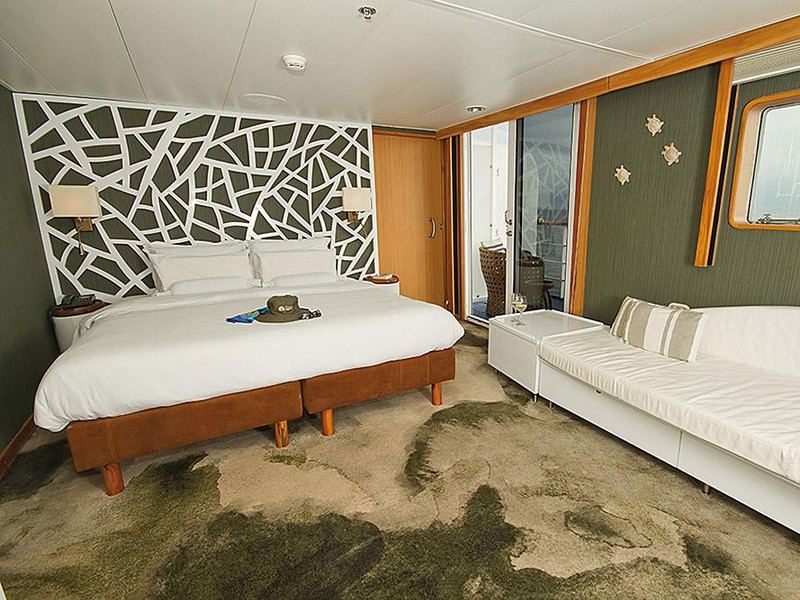 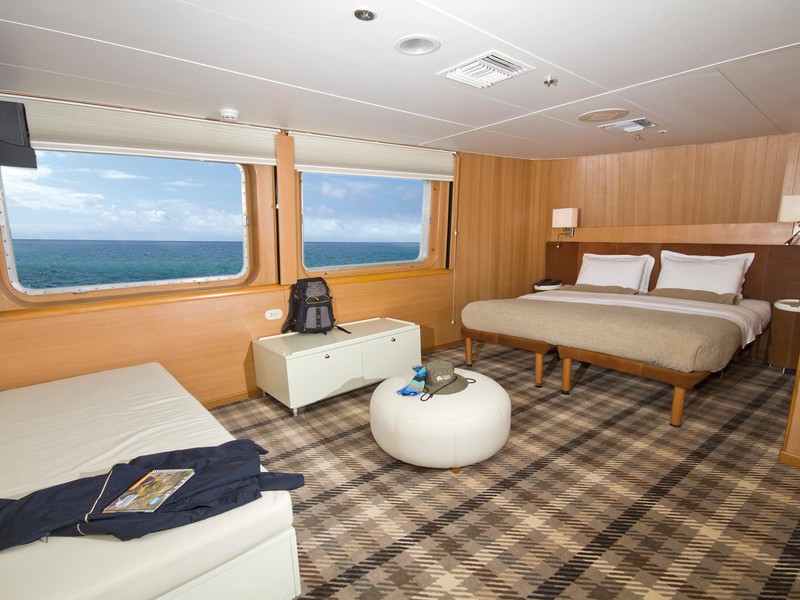 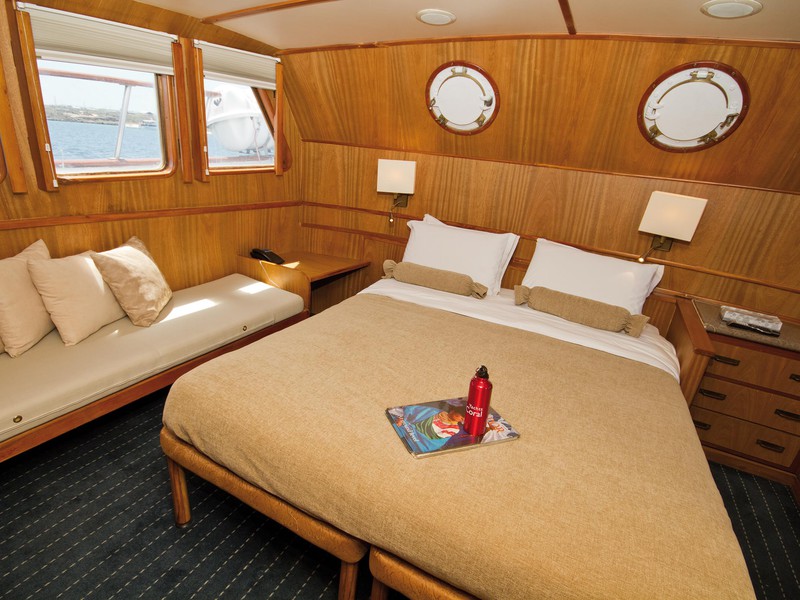 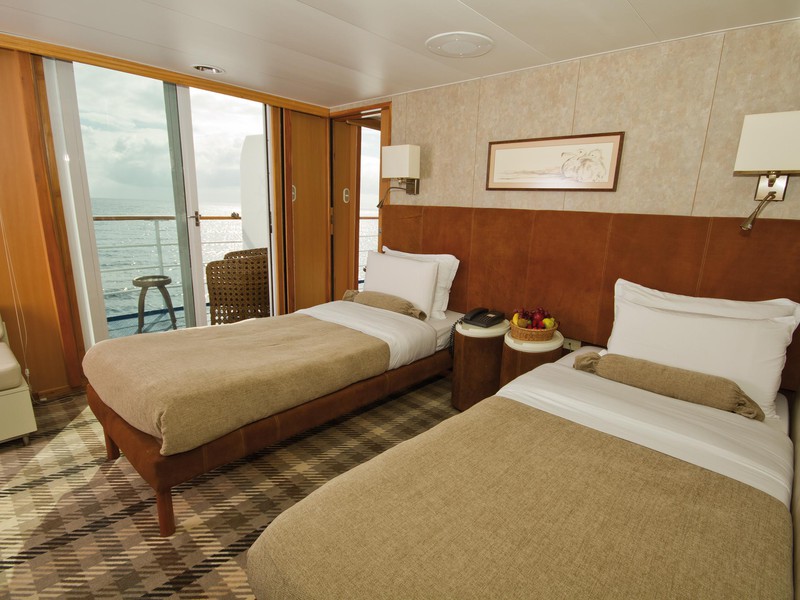 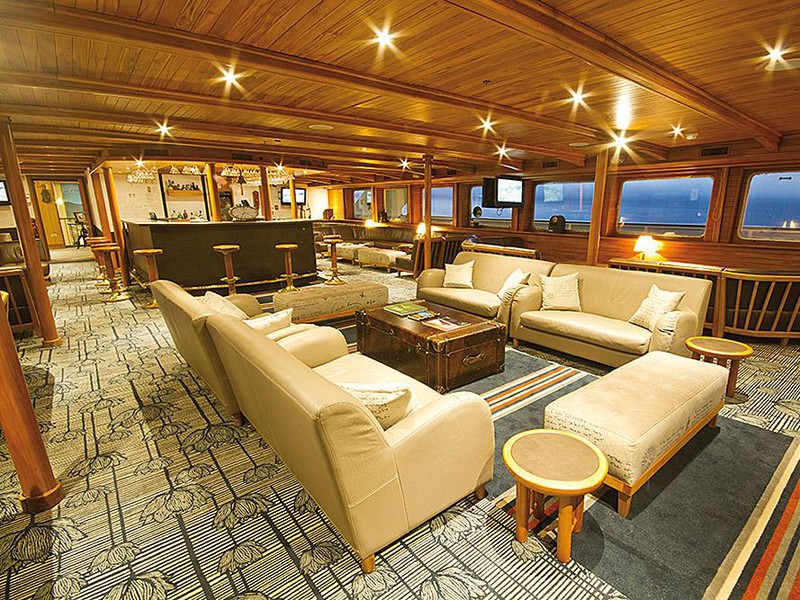 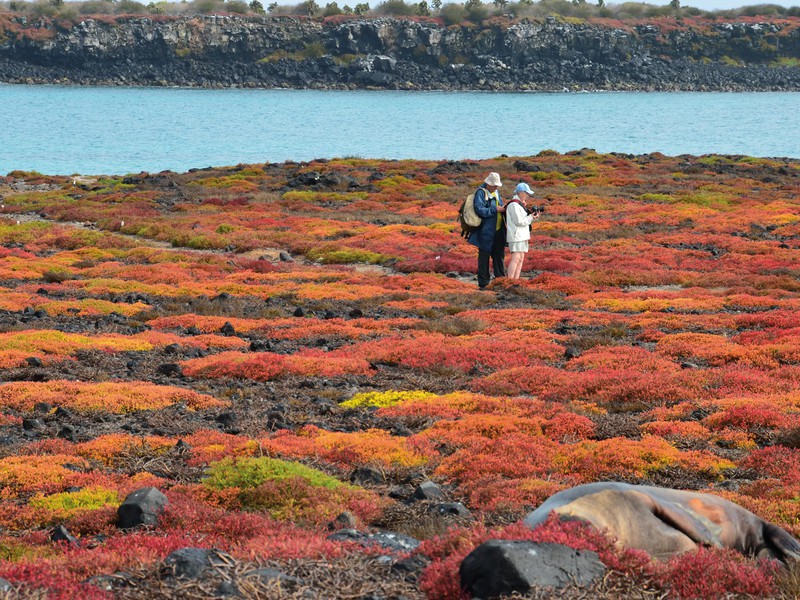 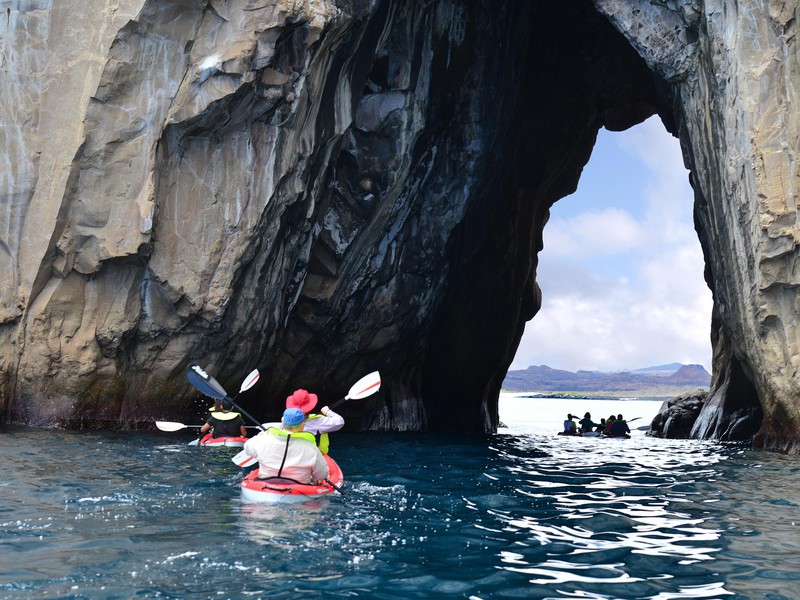 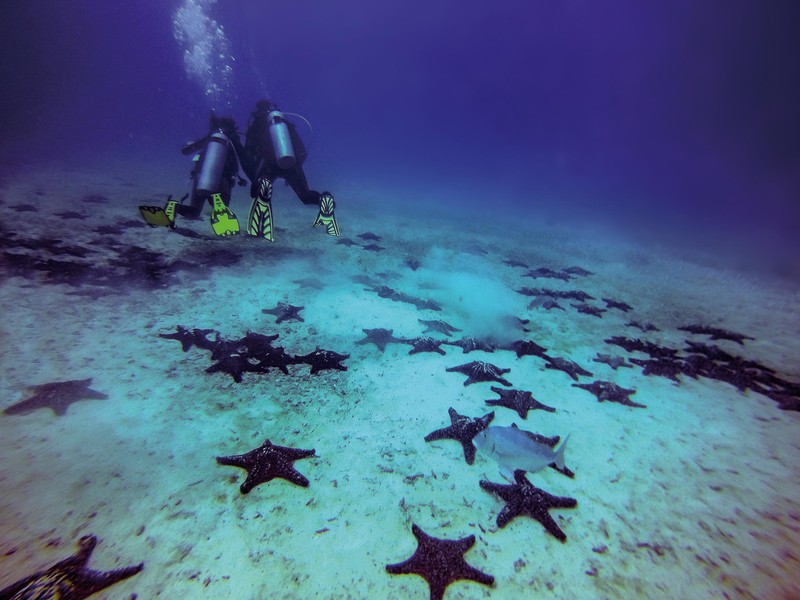 Diving in the Galapagos Islands

Transfer to the Galapagos Legend

Morning: After arrival in Baltra, a guide will collect you from the airport and help you transfer to the Galapagos Legend.

Afternoon: Discover a fascinating landscape formed by different volcanic parasitic cones —lava bombs, spatter, cinder cones — that resembles the moon. Going up to the summit there will be an impressive views of the surrounding islands, including the eroded tuff cone Pinnacle Rock. You may also encounter marine iguanas, lava lizards, and blue-footed boobies.

The time at the beach is a great opportunity to go snorkeling and see the famous Galapagos Penguins, sea turtles and White-tipped Reef Sharks among a great variety of colorful fish. For many visitors, this may turn out to be the best snorkeling experience. Crystal clear water is the perfect spot to appreciate the incredible marine life it has to offer.

Due to its geographical location, the lack of vegetation is immediately noticeable however, there are pioneer plants including the endemic Tiquilia nesiotica and Chamaesyce (known as sand mat or spurge in English), lava cactus, and Scalesia bushes.

Morning: The walk begins with an impressive cactus forest surrounded by land and marine iguanas; as you reach its highest point, be on the lookout for tropicbirds, nazca and blue-footed boobies, and swallow-tailed gulls. In South Plaza there is a large colony of the smaller sized land iguanas. The population is approximately 300 individuals. They feed on all kinds of vegetation, but during the dry season survive on the fruits and flowers of Opuntia cacti.

Due to their proximity with marine iguanas, this is the only place on Earth where you will find the Galapagos hybrid iguana!

Afternoon: North Symour was formed by a series of underwater volcanic eruptions, which deposited layers of lava on the ocean floor. An approximately two-hour walk amidst large nesting colonies of blue-footed boobies, magnificent and great frigate birds, and swallow-tailed gulls for an in depth encounter with sea bird breeding cycles and sea lions. You will also encounter land iguanas, and on a lucky day, you might even come across the endemic Galapagos Snake.

Morning: Wet landing followed by a high intensity hike on rocky terrain. The trail includes a beach covered in olivine crystals and a path that climbs to the top of a volcanic tuff, through several magnificent viewpoints. This is probably the only site where the three booby species of the Galapagos can be seen together, as well as two species of frigatebirds and a sea lion colony; it is also excellent for dinghy rides and snorkeling, where a good range of sea birds can be observed.

Afternoon: Wet landing. Cerro Brujo is an eroding tuff cone that at several locations is composed of AA lava formations, and a beautiful white sand beach, great for snorkeling and sunbathing. You visit a lagoon where migratory bird species can be seen: black-necked stilts, ruddy turnstones, whimbrels, other sandpiper species and white-cheeked pintails. Cerro Brujo offers beautiful views of Kicker Rock, the southern part of San Cristobal and the adjacent coast.

Morning: Visit the San Cristóbal giant tortoise breeding center to learn about the National Park’s conservation programs. Enjoy a beautiful landscape on the way to the reserve. You will also have the opportunity to visit the port village, have a drink or shop for arts and crafts and other souvenirs.

Afternoon: The Interpretation Center is an excellent place to learn about natural history in the Galapagos. The Museum of Natural History displays information on the volcanic origins of the islands, their remoteness from the continent, ocean currents, climate, the arrival of the different species and their colonization, among other points of interest. The human history is also showcased, chronologically narrating the most significant events related to the discovery and colonization of the islands.

Afternoon: An island of geological interest, you can explore volcanic formations and a riveting wildlife: large sea lion colonies and seabirds including Española mockingbird, Nazca Boobies and the spectacular Red-billed Tropicbird. You will also encounter marine iguanas, lava lizards, and the colorful Sally Lightfoot Crabs. A somewhat lengthy hike will bring you among Nazca and Blue-footed Boobies, right up to nesting grounds that sometimes overlap the trail. Other birding favorites include Galapagos Dove, Galapagos Hawk, Swallow-tailed Gulls and the world’s largest colony of Waved Albatross, an unequivocal highlight during mating season (May-December). Admire the island’s dramatic backdrop, featuring the famous Soplador, a seaward blowhole that shoots water some 23 m. (75 ft.) in the air.

Morning: Located on the north side of Floreana, the bay is so-named because in 1793 Captain James Colnett installed a wooden barrel which served as an informal post office for sailors passing through, who would take letters with them to their destinations. Today, visitors continue the tradition by placing unstamped postcards inside the barrel that should reach their destinations for free. It can take weeks, months, even years to arrive, sometimes, they even arrive before you!

Afternoon: Hike from the black mangrove beds to a salty lagoon, home to one of the largest flamingo populations in the Galapagos. This island features some endemic plants such as Scalesia villosa, white and black mangrove, and holy stick. The trail continues to a beautiful white-sand beach, one of the most important nesting sites of Green Pacific Sea Turtles.

From the beach you may spot sea turtles, blue-footed boobies plunging into the water, and small reef sharks floating along the shoreline in search of food. This coral-sand beach marks the end of the trail, and you head back to the olivine beach you landed on to swim or snorkel amongst sea turtles, reef fish, sea lions and, on a good day, white-tipped reef sharks. A small colony of penguins resides on Floreana and can sometimes be observed as well.

Morning: The highlands of Santa Cruz form an impressive contrast to the lower and arid areas of the island. With a nature guide you visit the twin craters "Los Gemelos" as they are called in Spanish. There you will find Scalesian forests, an endemic species of the Galapagos Islands, as well as giant cacti and a variety of deciduous trees and edible fruits. The change of different vegetation is particularly appealing. Hundreds of Galapagos giant tortoises inhabit the area of ​​El Chato and La Caseta. Here they are in their natural habitat. The half a mile lava tunnels lie underground, making their visit a unique, almost unreal experience.

Visit the Fausto Llerena nursery on the island of Santa Cruz. This is where Galapagos tortoises of various islands of the archipelago are reared. When they reach the age of 2 to 3 years, they are released into their natural habitat.

Afternoon: Ballena Bay is a beautiful green sand cove at the base of Dragon Hill on the west coast of Santa Cruz Island. The beach contains plenty of olivine crystals of volcanic origin. The crystals were formed when the magma was still underground. The content is magnesium, iron, and silica. A small population of tortoises from Pinzón Island lived at the site but were probably taken by whalers or previous inhabitants. Here, you have the opportunity to see marine iguanas and sea birds followed by snorkeling.

Eden Islet is off the western coast of Santa Cruz. It offers opportunities to see Nazca and blue-footed boobies, reef sharks, and schools of endemic bream fish, either from the dinghy or while snorkeling.

Morning: Dinghy ride at the entry of the Itabaca channel in a lagoon with turquoise water, where we can observe sharks, blue footed boobies, and different kinds of fish.