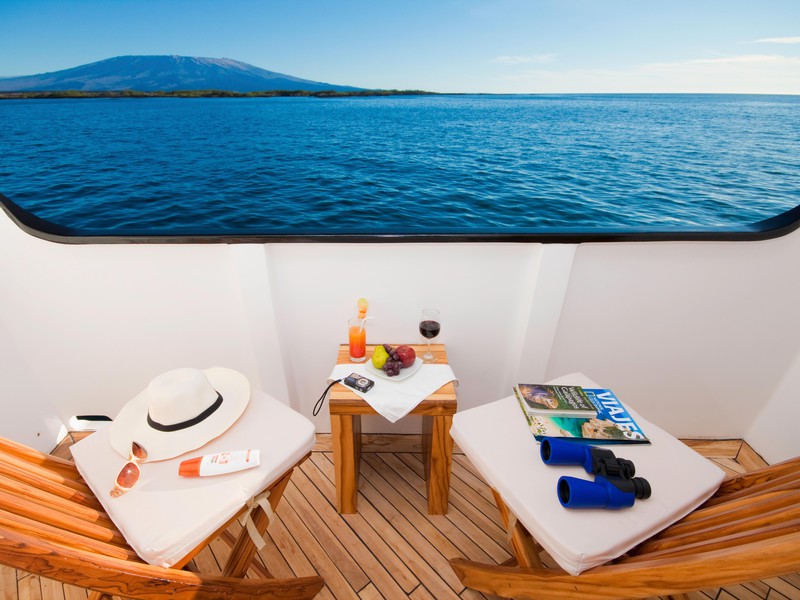 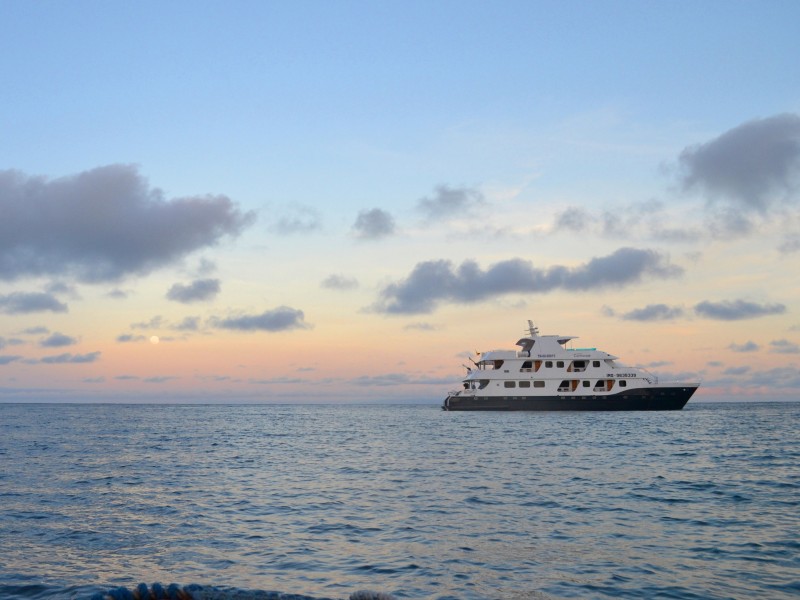 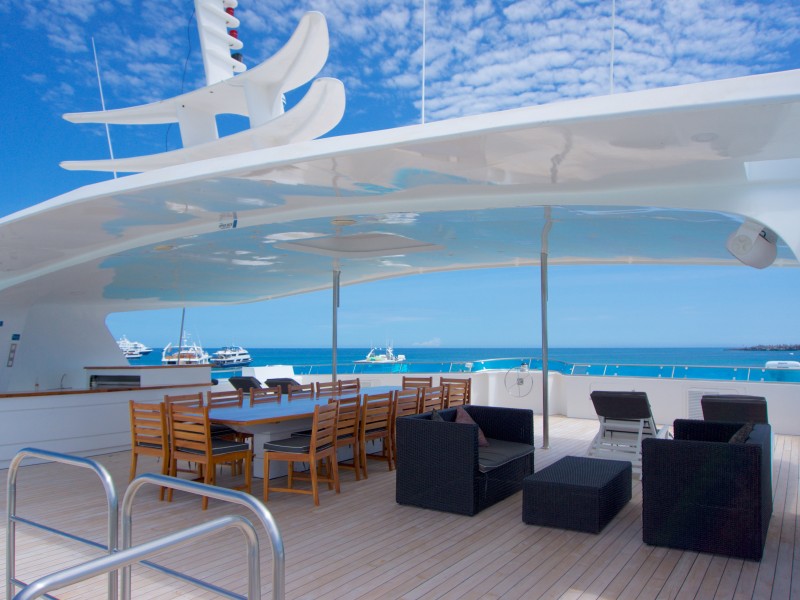 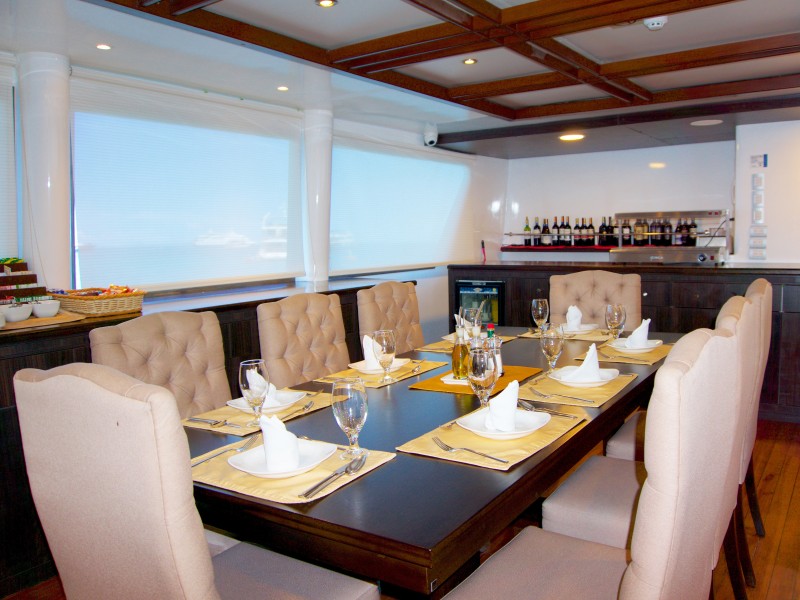 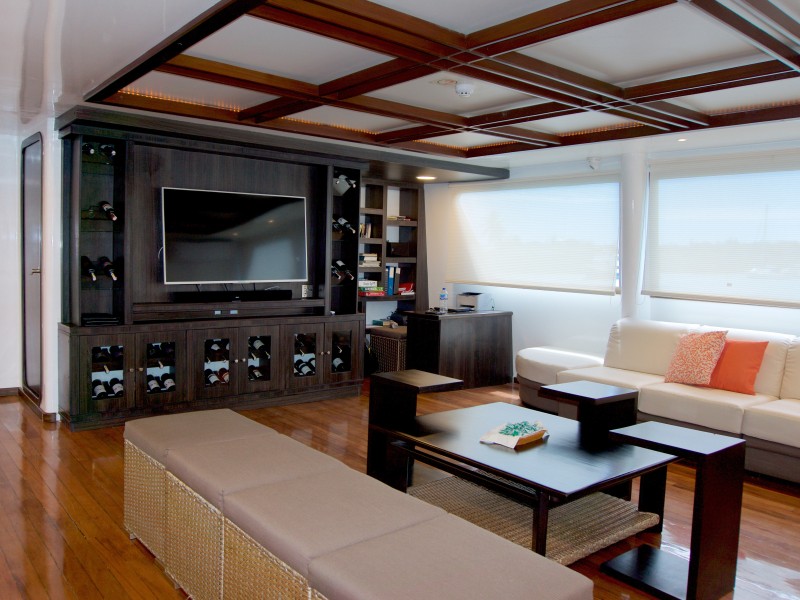 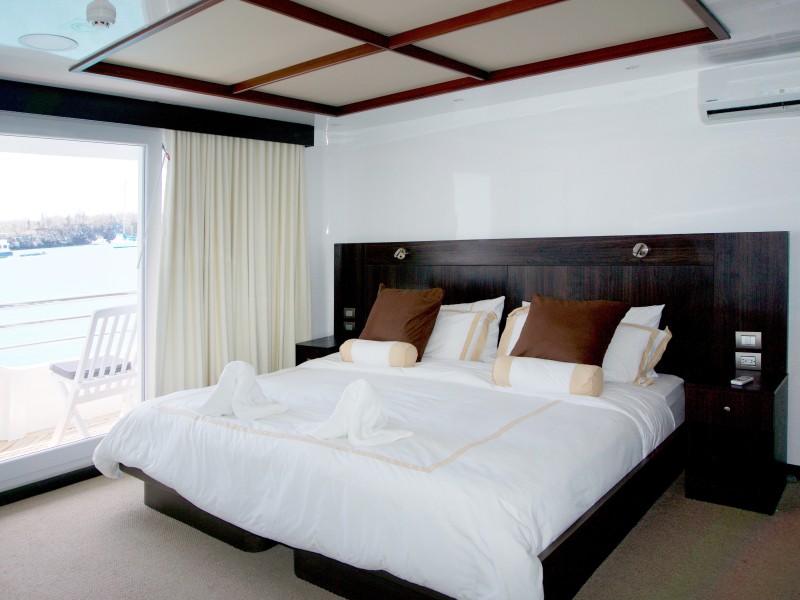 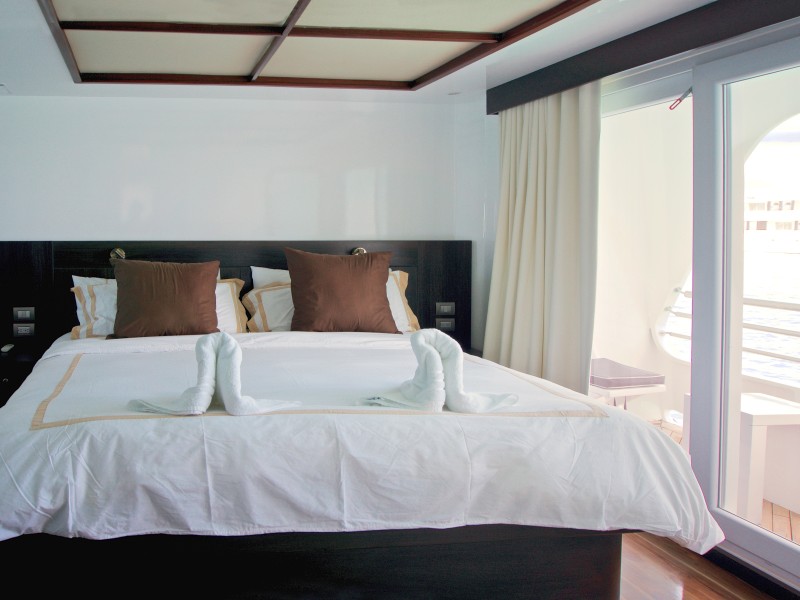 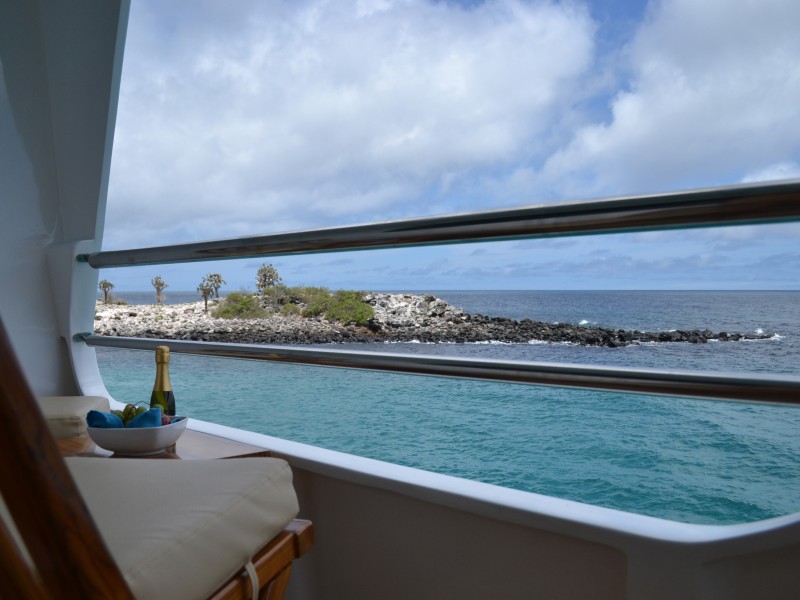 View from the Balcony 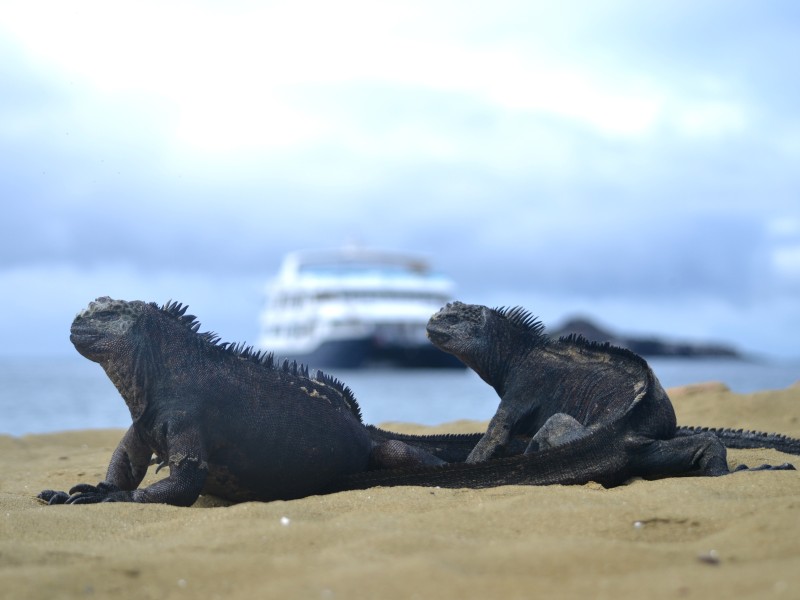 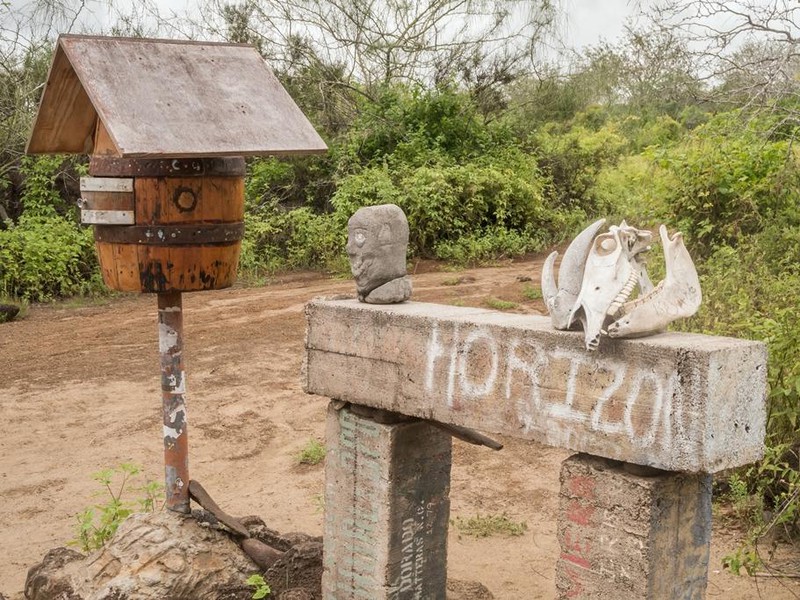 Transfer from Baltra Airport to the Harbour

Arrival in Baltra airport and transfer to the boat. Once you've arrived on board, you will receive a safety briefing and an introduction to the boat and the islands.

Afternoon: Genovesa Island is secluded from the other main islands in the north of the archipelago and is well-known as Bird Island. Emerging from the narrow entrance, you'll reach Darwin Bay, surrounded by protective cliffs. Frigatebirds regularly patrol the skies here and petrels can be seen hunting coastal waters for smaller fish. The green water in the bay is evidence of a high plankton content which attracts fish and seabirds, making this wildlife-rich bay a wonderful site for snorkelling. With some luck, you may also encounter peaceful hammerheads and black spotted stingrays.

Morning: One of the smallest and most colourful islands in the archipelago, Plaza Sur, or 'South Plaza' in English, is just a short sail from Santa Cruz. Reaching dry land, you will come across some of the islands friendly sea lions, one of the many types of animals on Plaza Sur for you to discover.

Wander by the nesting places of swallow-tailed gulls, audubon shearwaters, red-tailed tropicbirds, masked boobies and frigatebirds. The entire island is carpeted with dense sesuvium plants. From June to November, during the colder and drier season, the plants turn a deep red color which gives the island a dramatic, fascinating atmosphere. Watch the iguanas searching high up in the opuntia trees for fruit - a sight you won't find anywhere else in the world.

Afternoon: Upon arrival at the white sand beach you will be greeted by a large colony of sea lions. A trail leads you from the beach into a forest of prickly pears and Palo Santo trees. It is not rare to spot Galapagos hawks and even owls in the salt bushes. Even harmless snakes and the endemic rice rat can be discovered with a little luck while exploring the island.

Arguably the most special, however, is the Santa Fé iguana. This species differs from its peers due to its significantly lighter color and distinct dorsal spines. Cool off with a snorkel or swim in the bay, or take one of the kayaks out to get a little closer to the offshore wildlife.

Morning: Punta Pitt, situated on the north-eastern tip of the island, hosts frigatebirds, storm petrels, and all three types of the Galapagos's species of Booby - the nazca, blue-footed and red-footed boobys. A steep trail goes up a cliff and through a ravine leading visitors to an area with a special abundance of birds. After the hike, grab your snorkelling gear and cool off with some world class snorkeling and scuba diving.

Afternoon: Located on the northern coast, Cerro Brujo (aka Witch Hill) and its surroundings present one of the most picturesque beaches in the Galapagos. With white powdery sand, a beautiful view out to the famous León Dormido rock formation, and an abundance of friendly animals, for Cerro Brujo it is certainly worth remembering your camera. Wildlife includes sea turtles, rays, and various types of Boobys. The clear water provides an excellent opportunity to enjoy swimming and snorkeling.

Morning: Opened in 2003, at the beginning the centre could only be reached on foot from the coast, but today it can be reached by road from the streets of the harbour town of Puerto Baquerizo Moreno. The journey takes about 1 hour and takes you across the island. Also known as Cerro Colorado (coloured hill), it offers an informative visitor centre that explains more about the origin and development of the Galapagos giant tortoises. The breeding station also displays measures taken to protect the endangered species from habitat destruction and introduced species. The baby tortoises and young animals at the station are released back into their natural habitat when they are about 4 months old. The larger giant tortoises can then be observed from a short hiking trail.

Afternoon: Isla Lobos is sometimes known as Sea Lion Island, for the huge colony of resident sea lions. Fire engine red Sally Lightfoot crabs strike a strong contrast against the black volcanic rocks during your hike on Isla Lobos. Other curious creatures living on the otherwise uninhabited island include land iguanas and pelicans. Bring your snorkelling gear and treat yourself to a refreshing dip.

In the 19 meters between the surface and the seabed, León Dormido offers snorkelers and divers a dazzling array of sealife. White tip reef sharks, Galapagos sharks and even hammerhead sharks are often spotted darting between eagle rays and sea turtles.

Morning: Española is a geologically interesting island where you can explore the volcanic formations and spot a lot more of the Galapagos's unique fauna. Regular sightings include large sea lion colonies and flocks of seabirds, such as the Española mockingbird, the nazca booby and the spectacular red-billed tropicbird. There are also marine iguanas, lizards and Sally lightfoot crabs.

A long hike will take you past the world's largest colony of Galapagos albatrosses! During mating season (May to December) you will have the opportunity to see the nesting area of the albatrosses and if you're lucky, you'll even get to witness their courting dance. The courting dance of the albatross is extra special as it is the start of a life-long bond for these birds who mate for life. Other interesting birds include Galapagos doves, Galapagos hawks, and whip-tailed gulls.

When snorkeling or diving, you have the opportunity to see the diverse underwater world of Gardner Island. Californian angelfish, parrotfish, manta rays and white-tip reef sharks all call these waters home.

Morning: Here at Post Office Bay, learn about the historic barrel that has served as a post office in the archipelago for over two centuries. Lonely sailors, away from home for years at a time, would stop at Floreana to restock their supplies of food and water. The homesick sailors devised a clever solution - they left letters in a makeshift 'post box' on Floreana, and when passing ships stopped on the way back to their home port, they would pick up all the letters destined for that place and deliver them.

Afternoon: Punta Cormorant is home to two stunning natural beaches. You'll make a wet landing in the first bay, where you'll find a special black sand beach that twinkles green in the sunlight. The shimmering sand is made of olivine crystals, remnants of a long-gone violent volcanic eruption. Following the short trail along the beach, you'll come to a second little bay. Visitors will be delighted by the soft, white powdery sand that feels like walking in fine baking flour. This gorgeous beach certainly earned the name "Flour Beach". In the bay you will likely spot green sea turtles, and if you wander back from the sandy stretch, you can find a salt water lagoon that attracts regal flamingos and adorable white cheeked pintails.

Morning: The highlands of Santa Cruz offer an impressive contrast to the arid climate in the lower altitude zones of the island.

As you venture into the higher altitude areas, you will notice the changes in the vegetation as the climate becomes wetter and warmer. The earth in the upper altitudes is rich in minerals. Coffee plantations and fruit orchards line the streets. Here you can observe the famous Galapagos giant tortoises in the wild, learn about the underground lava tunnels and see giant cacti and a variety of deciduous trees and edible fruits.

The Scalesia zone between 250 and 600 meters altitude offers the opportunity to discover many endemic tree species not found in the Ecuadorean jungle. The twin craters "Los Gemelos" are also in this zone. However, they are not craters in the technical sense, rather 70 meter vertical gullies, carpeted with lush vegetation.

Please keep in mind that on departures days, your morning visit will be early and short. The crew need to be prepared before heading back toward the airport in time for your return flight to Ecuador’s mainland, or your individual Galapagos program.