Visit the islands of Santa Cruz, Isabela, Fernandina and Santiago

The Coral I and II 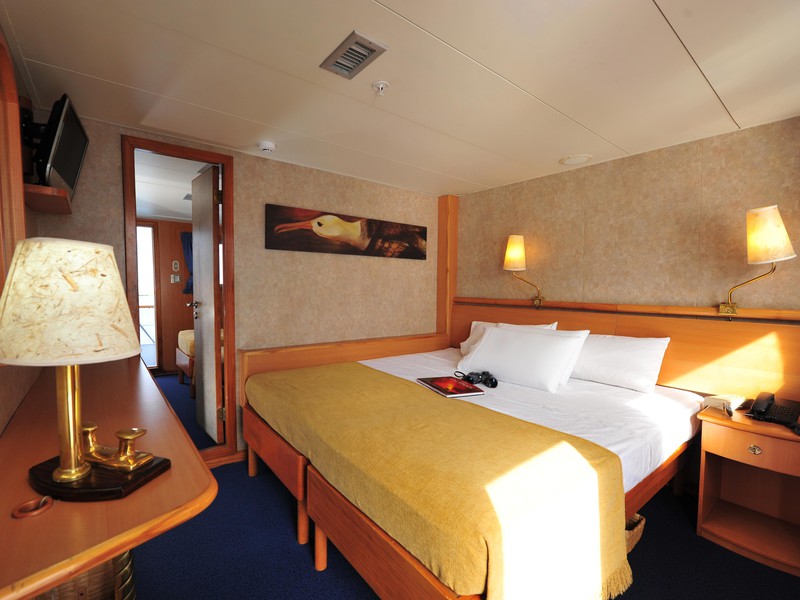 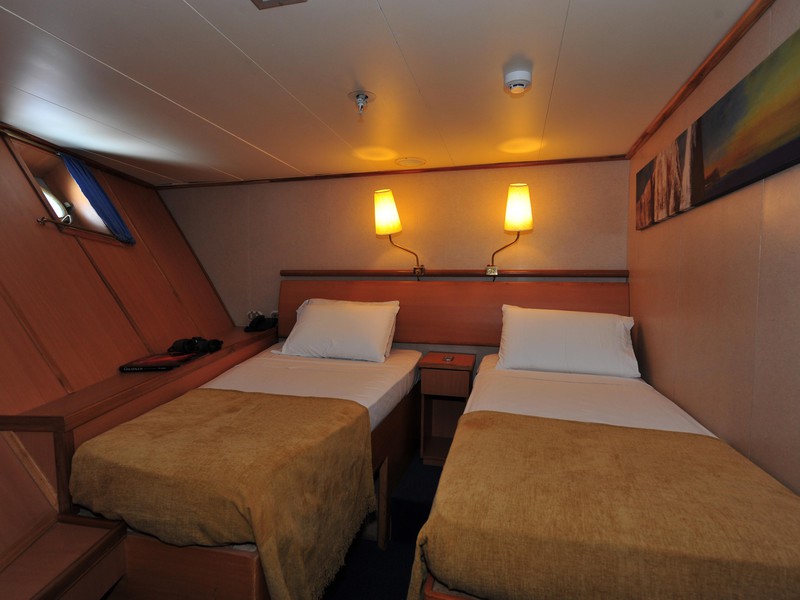 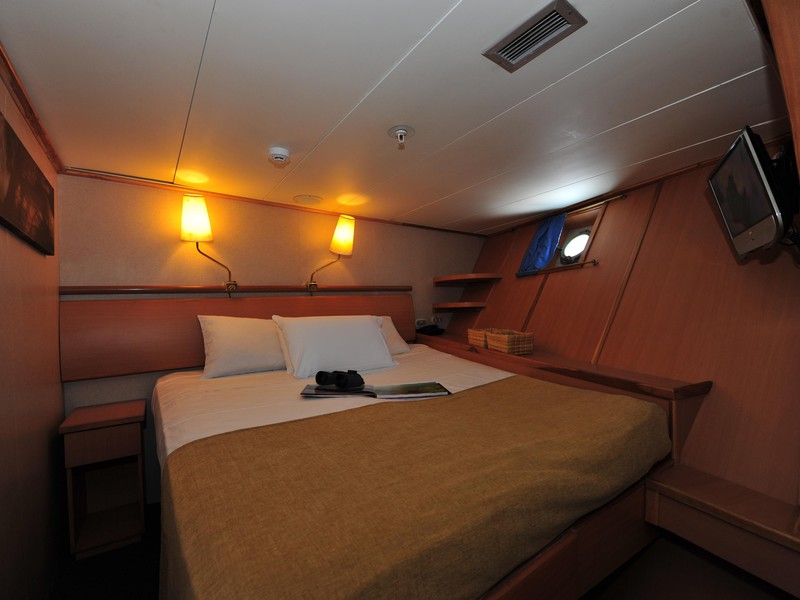 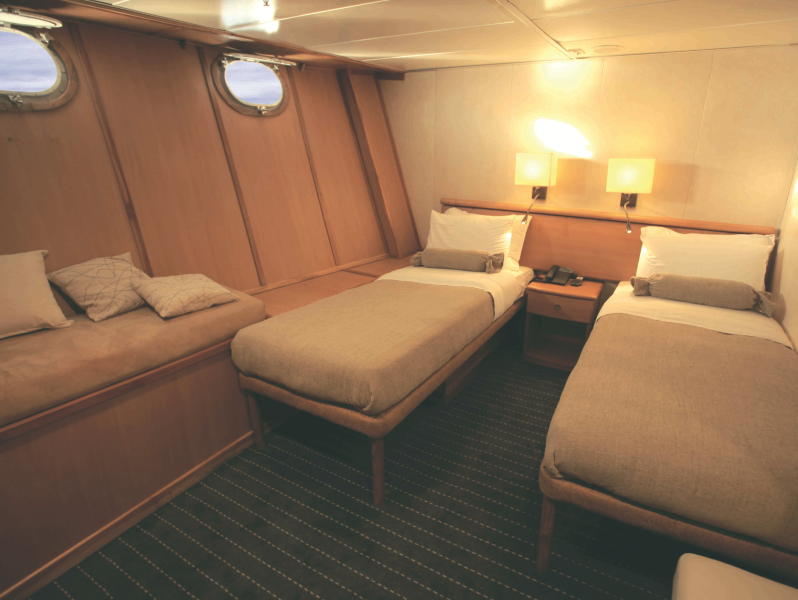 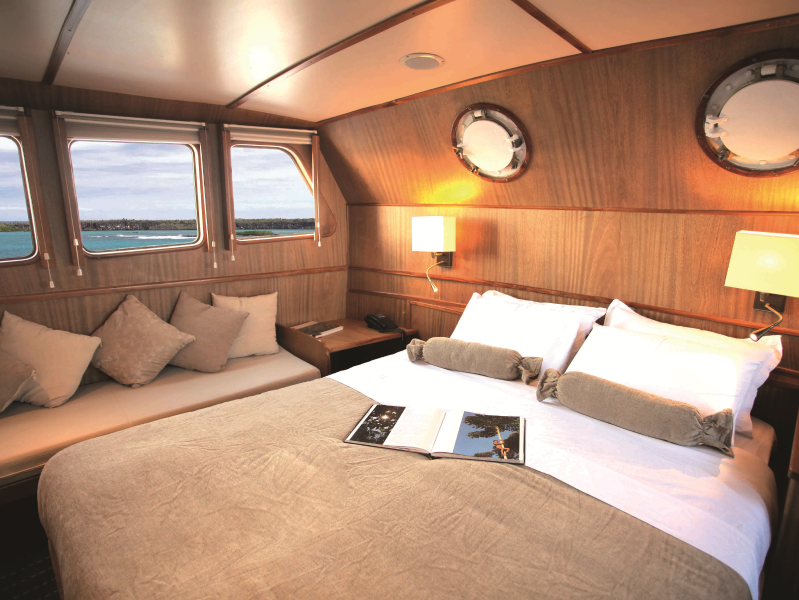 You will arrive at Baltra airport in the morning where you will be met by the crew. Your guide will then escort you to the ship and you will be informed about the coming days and can settle into your cabins.

Afternoon: As the only island that makes all vegetation zones accessible to visitors, it is a great place for a short trip to the highlands. Already from the beach, you will be greeted by magnificent flora and fauna that will follow you up to the highest point of the island. The bus trip will take you along the island's agriculture and will smoothly transition into the green, mist-covered forests. Here you will experience a stark contrast to the other islands, which have less altitude and more aridity. Together with your guide, visit different places here in the highlands, such as the giant tortoise reserve and the famous lava tubes. Look forward to a breathtaking landscape and a short walk with unforgettable phenomena.

Afternoon: Fernandina is the youngest island in the archipelago, at only around 700,000 years old. Surrounded by hills amidst a lava landscape covered with cacti and mangroves is the visitor location, Punta Espinoza. Meet sea lions and hundreds of marine iguanas basking on the black lava rocks and on the beach. While snorkelling you might come close to the resident penguins darting quickly through the water.

Morning: Urbina Bay graces the southeast flank of the Alcedo Volcano. After volcanic activity in 1954 caused a significant uplift, the coast expanded almost a kilometre out. Marine life found a way to thrive in this new fertile area and many species chose to stay. Today, this area is a great place for snorkelling. During your hike, you may see a large colony of land iguanas, Darwin's finches, giant tortoises (from June to September) and flightless cormorants.

Afternoon: The historical pirate hideaway of Tagus Cove has been frequented by sailors since the 1800s. The names of visiting ships were often painted and carved into the cliffs surrounding the cove. Trails wind their way around Lake Darwin up to a ridge, offering wonderful views of the landscape and the ocean, with Wolf and Darwin Islands dotting the horizon. Punta Tortuga, just north of Tagus Cove, is another idyllic tropical beach surrounded by mangroves. Later, enjoy a panga ride through the cliffs, observing penguins, flightless cormorants, boobies, pelicans and Sally Lightfoot crabs. Return to the cove to relax on the shore or snorkel.

Morning: The black beach along the northwest coast of Santiago Island is a great view, even from the ship. Upon arrival at the beach, two trails land for a walk. One leads you along the coast to "Fur Seal Grotto", where fur seals lie in the shade and rest on the cool stones of the coast from the strong sun. The grotto provides an excellent place for this and the surrounding pools of the tide attract marine lizards to forage in them. The second path takes you to the island's Pan de Azucar volcano, which is responsible for turning the beach black. The volcano's crater is filled with saltwater, which dries up in hot weather, leaving a dry saline landscape. Between 1928 and 1930, a salt mine was considered, but it was decided against because it was not feasible and lucrative. The lagoon is often home to Galapagos flamingos and other birds such as the Galapagos hawk, which circles over the landscape at high altitudes.

Morning: The Bachas Beach, which meanders along the coast of Santas Cruz Island, seems to be full of life. But also the Turquoise Bay and the symmetrical tuff-cone island of Daphne Major attract attention. After a short walk, you will come to a lagoon in the dunes that is home to various species of wading and shorebirds, including black-necked wilts, blue-cheeked ducks (or Bahamian ducks) and hunting herons. Migratory birds that hibernate in the Galapagos in winter, such as whimbrels, also stay in this lagoon. As soon as the water level drops and the lagoon becomes salty in the dry season, you might even come across some American flamingos who tirelessly filter this water in search of shrimp and algae. The remote northwest coast on the main island of Santa Cruz has become the preferred nesting site for Pacific green sea turtles. Females wait for the tide at night before crawling ashore.

Afternoon: The small island of North Seymour is one of the most diverse islands in the Galapagos archipelago. It is only about two square kilometres in size and above all known for the intensive courtship rituals of many magnificent frigatebirds, taking place here during mating season. The island is also home to large colonies of land iguanas, marine iguanas, and sea lions. The characteristic bush landscape features diverse species of animals amongst the aromatic endemic balsa trees.

Morning: Visit the Galapagos giant tortoises and land iguana breeding programme, where the famous Lonesome George (the last surviving specimen from Pinta Island) lived for decades. The centre is managed by Galapagos National Park (GNP) staff in collaboration with scientists from the Charles Darwin Station (CDS). Here, eggs from Pinzon, Santiago and Santa Cruz Islands hatch without the risk of introduced species. After artificial incubation, the "galapaguitos" (newborn turtles) are bred until they are 5 years old so that when they are released in their original habitats, they have enough skills to survive on their own. Since the 1970s, more than 2,000 specimens have returned to their native islands. In addition, Darwin Station works on several scientific projects, botanical research and provides environmental education for local communities, schools and tourists. If there is still time, you can take a stroll through the small town of Puerto Ayora.

Afternoon: Between the two islands, North Seymour and Baltra lies the small island, Mosquera. The narrow island's coastline stretches out with white sand beaches, lava rocks, and tide pools. Created by Geological uplift, the island has a relatively flat landscape. Mosquera is a great place for snorkelling, strolling on the beach, and enjoying the animal life without the tourist crowds that are common on many of the more popular islands. This islet is home to a huge colony of resident sea lions and is also home to many shorebirds.

Morning: A geological uplift created the small islands of Plazas, these two small islands are located to the east of Santa Cruz Island. The northern Plaza Island is inaccessible to visitors, but the southern Plaza Island offers something for the bird discoverer and nature admirer. The north coast of Plaza Sur Island is a dry landing, while the south coast is a 25-meter high inaccessible bluff. The island is about 1.5 km long and 500 m wide. The island is home to a considerable number of giant opuntias and a sea of sesuvia. Both plants are endemic to the islands. The sesuvias, with their almond-shaped leaves, are green in the rainy season from December to May and then turn yellow in the dry season, later turning red and purple, giving the island a somewhat otherworldly appearance. Sea lions await you at the jetty. From there you will hike to the cliff. On the way, you will see many, stately land iguanas. An ideal place to admire the flight maneuvers of the fork-tailed gulls and other seabirds.

Afternoon: You will reach the island, which is 24 km² and 60 meters high, only with a wet landing and is a unique place in the middle of the archipelago. You will enter the island in an incredible bay, filled with turquoise waters and surrounded by a rocky reef. The island is home to many land dwellers, like one of the land lizard species of the archipelago, They live on this island and feed on the fruits and leaves of the cacti that grow here. In addition, a large sea lion colony lives here and Galapagos hawks may be circling over your heads. If you are interested, you can also swim and snorkel here to explore the underwater world a bit. Here sea turtles, sea lions, rays and various tropical fish cavort in the water. If you don't want to go into the water you can watch sea lizards, Galapagos doves or cliff crabs on the shore. The Galapagos National Park has ordered a temporary ban on swimming, snorkelling and/or diving in the waters around Santa Fé. But rest assured, your tour operator will replace it with something equally fantastic!

Morning: The small island of Lobos, near the island of San Cristóbal, is not only home to a sea lion colony, but also a pair of fur seals find their rest here. Amid these large sea dwellers, there are also nesting blue-footed boobies that raise their young here. One or two paths lead to the centre of the island, where you can enjoy the tranquillity of the Galapagos archipelago. It is a popular place for visitors to simply become aware of nature and the wonders of the islands.

Back at the beach, the island's positioning close to San Cristóbal Island makes it a great place to snorkel and marvel at the underwater world. The water is clear and calmer than in other areas of the archipelago, providing perfect conditions to see seahorses and a variety of colourful tropical fish.

You will arrive at the port of San Cristóbal. From there, you will either transfer to the airport for your return flight to the mainland or continue with your individual Galapagos program.